The 5 Most Famous Guns in History 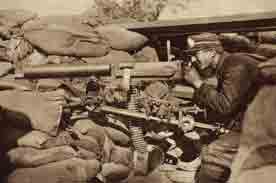 Major innovations in gunsmithing have not only helped shape modern gun design, but have also played a critical role in world history. Imagine how different the Wild West would have looked without the Colt .45, or how WWI would have ended without the invention of the machine gun. A number of firearms throughout history have earned iconic status, through movies and pop culture. Others were key in leading to breakthrough design that fueled the next generation of gunsmiths.

The following five weapons are prime examples of how guns combine artistry and the cutting-edge technologies of their era to earn a place in history.

No gun is more famous in early American history than the Colt Single-Action Army. Perhaps better known as the Colt .45 or the Peacemaker, this revolver was the standard issue for the U.S. Cavalry from 1873 to 1892, but was also a favorite amongst settlers, gunslingers and lawmen on the American frontier. Known to many as "The Gun That Won the West," this iconic firearm will go down in history for more than its popularity. Manufactured by Colt's Patent Firearms Manufacturing Company, this legendary revolver was made using interchangeable parts and Colt's innovative assembly line techniques – breakthroughs in gun development that meant that guns could be mass-produced instead of individually created by gunsmiths.

Designed by American gunsmith Sir Hiram Maxim, the Maxim gun marks an important spot in history as the first recoil-operated machine gun – this eventually led to the modern machine gun. Maxim’s design used the recoil from firing one bullet to load another, which allowed the gun to continuously operate without manual power. Although Maxim’s name might not be famous, his gun played a major role in shaping world history, helping imperialist nations expand their colonizing efforts, and contributing to the mass death and destruction WWI is known for.

The M1 Garand was developed by gunsmith John C. Garand for the American military after it was decided their current service rifle was too strong for combat. Garand designed the gun using principles similar to the Maxim gun: the energy generated from firing the gun is then used to chamber the next round. The M1 Garand – more officially known as the U.S. Rifle, caliber .30, M1 – became the standard service rifle for the U.S. Armed Forces in 1936 and was widely used during WWII. The M1 Garand had an advantage over bolt-action rifles, improving the rate of fire dramatically, and thus giving U.S. forces the upper hand in WWII. This is what likely led General George S. Patton to call it “the greatest battle implement ever devised.” The Garand continued to be used through the Korean War and part of the Vietnam War before being replaced. It is still commonly used today by drill teams.

The Uzi is another iconic gun, developed by Major Uziel Gal for the Israeli Army in 1948. Technological advances gave this submachine gun the advantage of being small and lightweight, making it a weapon of choice for those in confined spaces. For such a small gun, the Uzi has tremendous firepower. Since its creation more than 60 years ago, the Uzi has seen widespread use, adopted by more than 90 countries for military and law enforcement use.

Easily one of the most recognized guns in the world, the AK-47 was designed by Mikhail Kalashnikov for the Soviet Red Army in 1940. Low production costs, reliability, and its ability to withstand severe conditions has made the AK-47 a popular gun worldwide, with more than 75 million likely produced.

Take your place among others in the proud tradition of gunsmithing. With Penn Foster’s gunsmith career diploma program, you can become a gunsmith in as few as three months. Learn how to identify, evaluate, disassemble, reassemble, custom-fit and repair firearms of a wide variety through an online curriculum and a series of streaming videos that show you step-by-step how the pros do it. Penn Foster Career School has been providing top-quality gunsmith training for more than 30 years.  Learn more about our Gunsmith Career Program.