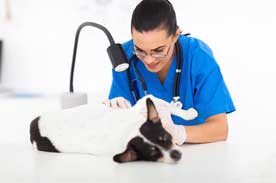 Plenty of people jokingly refer to their pets as their “children,” but that statement might be truer than you think – a new study shows that pet owners have a connection with their pets that closely mirrors a mother-child connection.

Researchers at Massachusetts General Hospital studied a group of mothers who also owned pets, and brain scans showed they elicited similar emotional reactions when showed photos of their pets and their children.¹ It’s just more evidence that Americans are pet-crazy – the U.S. pet industry is expected to rake in an estimated $58.51 billion this year.

At Penn Foster College, you can train at home or on the go and gain real-world experience during your practicums. We’ve formed relationships with two of the largest veterinary hospitals in the country, and our faculty includes practitioners, authors, and officers of state and national veterinary technology education associations.