Happy 4th of July from the Student Life Blog 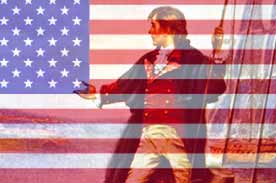 I love holidays, well not all holidays. For example, I am not a big fan of Valentine’s Day.  After all, it is a made up holiday with no historical significance. I believe we should show those that we care about that we love them every day and not just with store bought cards, flowers and outrageous gifts one day a year. However, that is just me and I admit I am rather cynical at times. Though, I must admit the Fourth of July is a holiday I can get excited about.

Historically, the fourth of July is considered the birth of our nation. The fireworks we set off and ooh and aah over should be a representation of the rockets that soared through the sky as the revolutionaries fought off their British oppressors.

Did you know that flag we now hang or turn into clothing or burn as the case may be did not become legal until 1777?1  We have the right to do the things we do with the flag and symbol of our country because the men and women who were brave enough to stand up for their beliefs wrote a constitution that said we could.

By the way, the anthem we sing or mumble the words to or talk on our cell phones through at the beginning of sports events was written during one horrendous night in 1814 during a battle not during the revolutionary war for independence but defending Fort McHenry when the British once again attempted to reclaim their territory. Did you know that our anthem was originally written as a poem that was later put to music?2

In the 1980s I was teaching eighth grade, and I was fortunate enough to take several of my classes to Baltimore on their class trip. If you ever get the chance, take the opportunity to go to Fort McHenry. Make sure you go through the visitor’s center and experience the video. Even the “cool” thirteen-year-old kids were quiet when the video ended with the playing of the national anthem and the wall of curtains opened to display a huge flag blowing in the breeze. Later, at the closing ceremony the entire class helped the park ranger take the flag down and carefully folded 30’ by 42’ flag.3  I was always amazed by the respect the teens showed and awed by the questions they had for the ranger. Although it has been a few years since I have taken students there, my husband and I went to the fort this spring. It was raining and cold and many of the displays weren’t open.  They have moved the visitor’s center; the ending is different and no longer as spectacular. However, the video is still great, the flag is still waving, you can help take it down, and there are new displays to be seen.

We now use the day as a time to overindulge on hamburgers and hot dogs but did you know that John Adams (one of the signers of the Declaration of Independence) celebrated with turtle soup, poached salmon with egg sauce, and green peas with and boiled new potatoes in their jackets followed by apple pan dowdy for dessert?4 Personally, I prefer the modern food followed by apple pie!

In addition, I love this holiday is besides being the birthday of our country it was also the day that for 80 years we celebrated my father’s birthday as well. Interestingly, my dad was actually born on the 5th of July but much like our country we celebrated his birthday on the wrong day. Did you know that we should be celebrating our nation’s official birthday because Congress voted in favor of the declaration of independence on July 2, 1776?4

Finally, I happen to be from Pennsylvania, also known as “the state of independence” you know the home of the liberty bell, where the Declaration of Independence was debated and signed… hmmm…maybe I am not so cynical after all.4

So, how about you, is the 4th one of your favorite holidays or do you still prefer made up ones?

2  Klein, C. (2014). 9 Things You May Not Know About “The Star-Spangled Banner”. Retrieved from http://www.history.com/news/9-things-you-may-not-know-about-the-star-spangled-banner